Francis wyffels is a professor in the domain of machine learning and robotics. Over the last decade, he has built expertise with training recurrent neural networks, robotics, and unconventional computing with both (living) plants and robots. Consequently, within the AIRO lab, he focuses on interdisciplinary research related to robotic manipulation and unconventional computing. In this research, the link between (robot) morphology, control and perception are central.
Francis wyffels strongly believes in dissemination activities for which he has been awarded the UGent Hermes award for public/scientific engagement and knowledge transfer and the Google RISE award. As a chairman of Dwengo (a non-profit organisation), and by employing international projects with children, students, and schools, he wants to ensure a more realistic perspective on what robotics can achieve, and hopefully, reduce the almost innate fear for robotics. These education projects also form the basis of the didactical research on computer science education that is performed in AIRO. 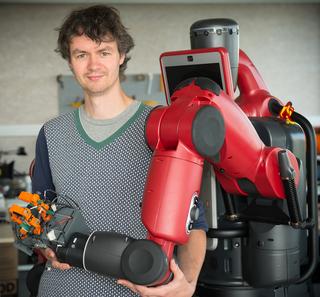